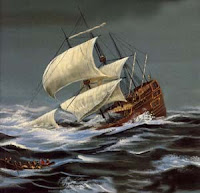 In the large ocean that would never end,
Sailed a large, sailing where the waves tend.
The captain and 9 sailors, forever steered.
To reach a destination, that never neared.

The captain was an intelligent lad,
But this was the first ship he had,
The deputy was new too,
But both weren’t out of the blue.

The Captain had his lady in mind,
After this journey he was to bind,
In the holy tryst of destiny,
He couldn’t get at all finicky.

The deputy was a new customer,
Didn’t know the size of his own shoe,
Treaded a bit faster, pushing too hard,
Wanting to earn some earnest regard.

The Three friends were always hung there,
They always offered to watch and steer,
But Thinny, Humty and Perfecto were bored,
Of doing cheap labor and staying up late aboard.

One funny guy name the SAM of the ship,
Happily everyone just gave him the slip
As he had the strange habit of poking his nose,
Irritating like the deck rats, outta their burrows.

The others too had to endure this way
As they had very little they could say,
The newbies in the block, just followed the Sir
Sometimes laughing out their canned anger.

But friends let me tell you what happened later,
The ship got attacked by an invisible stranger.
The captains hand-clock started spinning around.
The times were turning without a sound.

Suddenly the storm had struck the sea,
And the ship were sailing on its belly,
Twisting and turning it would just rock,
The captain and deputy were in a shock.

SAM sniggered and complained aloud,
The ship was covered with a dark cloud.
Then everyone could just hard work their way
To save themselves and keep the winds at bay.

The captain was confused the deputy was sad,
All this work had to turn so bad,
Perfecto pleaded that he wants to go home,
But all just worked, till the sun shone.

The crew then asked why they couldn’t withstand
A simple storm that was never planned,
Then it struck them that they weren’t at fault
Someone else had locked them in this vault.

The person unseen, who build the ship,
Who sold the shit, and sent us to hardship.
He didn’t know that the times can turn,
That with a small match a house can burn.

The crew of the captain and his 9 men cried,
That thug had caught us in his miss- design,
They were at sea now, what use to complain,
Why do they waste their energies crying in vain.

They collected and fought the time and tide,
They had to catch up with it, for it wont reside,
They vowed as they reached the shore that day.
They will not be a putty or someone’s clay.

The moral of the story here my friend,
On some people, you are forced to depend.
And if he is the one who sent you on this painful trip,
Pray that he will finally learn to build a ship.

Some people who have the responsibility of a whole team are sometimes just too ignorant or just arrogant and majorly just dumb. This not only leads to inevetable disasters but also a trauma like experience for the ones who are under them. I hope the guys who are the sailing this ship, can do more than just pray, but then if there is just one trader and you are his crew, May God just be with you :)
Posted by adhishg at 11:27 AM

nicely put story!....nd agree wid the morale of it :D