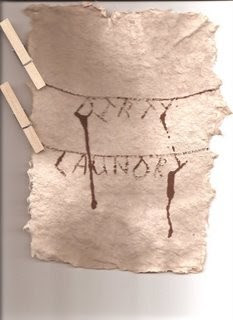 Closing my eyes to the sun, I felt the cloud turning grey
The rain was waiting to pour, On the parched 'well' of clay
Dried it was of all the good, Dried of all the pain.
The Eyes that twinkled in laughter, Was waiting still in vain.


The drops that never fell, The thirst that never went.
The aspirations that rose, never seemed God sent.
For I was thwarted at every go, never did i feel the lie.
I took all the boxers blows, never to say die.


Then came a day i lost the things, The only thing i could boast.
The friends that went across, that bridge that never closed.
I stopped the search for those, Whose memories were enough.
I moved on to new height, too thirsty to even cough.


Then i moved on not thinking, Feelings were not for me.
I was a mechanical tin king, as passive as the tree.
The horse was on strong tether, He never broke free
I allowed relations to wither, broke all the strings to me.


I washed my face when tired, but i felt no pain
No tears touched me, thats what i though twas sane.
I started pushing people, i used them to my gain.
Using all evil i had in me, i never used to refrain.


I used to wash my hands, again and again.
I showered for eternity, manytimes a day.
I never felt clean, i never felt fresh.
I felt like a mostor, and a man possessed.


Now confused i sit, i try to think straight.
I put all the wisdom and wit, now i call it fate.
But then i realized, it was iwho let it go on.
I let the emotions bind me, stop me from moving on.


I strangled my supporters, i kicked my heart.
I used all to become, what i didnt want at all
I wanted more though i wanted some too.
Today i washed my dirty laundry, Do you also want to?

Just a creative thought.... for a change...im not that bad guys just saw a rock on!! but somehow just got carried into writing this...i think would make a good song. :)
Posted by adhishg at 11:18 AM

good piece of work. Although its all kinda evil and negative....i did find it interesting....

so you jus felt to write dis after watchin a movie???or was it related to something else.